I have a brand-new blog:
With Heart and Humor.

Look for me at:

See you there!
xxoo
Ellen

Update on Downton Abbey or Why Julian Fellowes Should Totally Hire Me As A Writer, Part 2 (The Sequel)

When we last talked about Downton Abbey, I was reacting to the episode where...

Spoiler Alert! No really, go check the date on the milk carton. I found a yogurt in the fridge this morning that expired August 19. In fact, just stay in the kitchen, especially if you haven’t watched all of the last season, because I’m going to give away the ending.

If you were watching Downton Abbey in “real time” last winter, then you probably heard the rumors that “something bad” happens in the season finale. So you braced yourself for it. Because if Julian Fellowes was mean enough to kill off the lovely Lady Sybil, who knows what he would do next!

Except... well, it was kind of a let down. Actually it wasn’t a let down, it was more of a “good riddance.” Let me explain.

You know when you’re watching a buddy movie, particularly a buddy cop movie? At the beginning of the movie, the two buddies have a conversation. One of them ALWAYS says something like this: “Today I took my kid to the first day of kindergarten while my Hot Wife stayed home with the newborn, and she just quit her job so we’re relying on one income (mine), and yeah I just bought a boat that I named LIVE-4-EVAH and if I miss a payment on that then Hot Wife will lose the house.”

So when you hear that speech, you know, you just know, that it’s going to end badly. That guy will be so totally dead by the end of the movie. It’s an example of Dramatic Irony.

This same principle applies to Downton Abbey. Because every other word that Matthew speaks is “happy.”

Darling, I’m so happy! Darling, I’ve never been happier! Darling, let’s be happy like this for the rest of our lives! (etc. etc., ad infinitum)

This is an example of the literary technique of the Writer Beating You Over The Head To Make A Point.

If Matthew is so damn happy, you just know something bad is going to happen to him. So when he jumps into his British roadster (that he’s probably named LIVE-4-EVAH), you aren’t surprised when he meets a tractor. Not surprised at all. In fact, you are relieved, because you don’t have to listen to him declare how happy he is anymore. Because he was truly insufferable with all that happy talk.

So here’s why Julian Fellowes should totally hire me. Because a much better way to end the season is this... Matthew and Mary are so disgustingly happy! Until one day they argue. Maybe it’s because Mary wants to do the whole Sears parenting thing, with the family bed and all that. Matthew doesn’t understand why they can’t just hand baby over to a nanny, like the rest of the British upper class. They argue! Mary throws him out of the family bed! Matthew goes home to Mama Isobel to sulk. Mary confides in Anna that she’s thinking about a divorce and starts flirting with Edith's husband.

But one day Matthew suddenly realizes that he wants to be with Mary and the baby after all, family bed or not! He’s so happy when he realizes this that he leaves Isobel’s house and jumps into LIVE-4-EVAH and announces he’s heading off to his Hot Wife* and newborn because he’s realized the error of his ways and he must make it right! At just the same moment, Mary realizes she can’t live without Matthew, so to hell with the Sears method! But oh no, Matthew meets a tractor! Tragedy! They never get to make up!

Wouldn’t that ending be so much more satisfying?

*Okay, so maybe Matthew wouldn’t actually say “hot wife.” But then again, Julian Fellowes let a character say “sucking up” in an earlier episode, and I seriously doubt the British upper class used those words (in that way) in 1918. So maybe he would.


So the other day I'm driving along, minding my own business, when this old song from the 70's comes on the radio: Melissa Manchester's "Don't Cry Out Loud."

True confession: I used to sing along with this song a lot, probably because it's one where you can really belt out the lyrics. (And I know you did, too--admit it!)

However...
Just who is this "baby" and what is her deal with the circus?

And she "took up with some clowns," does she mean that literally? Because clowns are creepy as hell. Or does she mean "losers"? This is deep, people!

And has she had years of therapy to help her get over suppressing her emotions?
"Just keep it inside, learn how to hide your feelings..." That can't be healthy.

And what about the rather passive aggressive put downs?
"Fly high and proud, and if you should fall, remember you almost had it all..."
Um, what? "Get out there and do your best, but you won't, you'll mess it up." Gee, thanks, whoever you are.

Just some random thoughts as I'm driving along, minding my own business.

Fun fact: This song was written by Peter Allen and Carol Bayer Sager. And Melissa Manchester hated the song and didn't want to record it. But it was a big hit for her in 1979.

WARNING: If you are, like me, creeped out by clowns, do not DO NOT watch the video!

After last night's episode of Downton Abbey, I don't want to work at your show anymore! 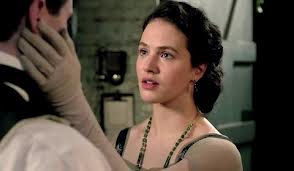 Oh all right, I'll come back.

Spoiler Alert: If you haven't watched S3:E5, you should probably stop reading this.

Just when I was about to give up on this show and its easily-solved problems (Robert lost all the money! Matthew inherits money unexpectedly! etc.), something like this happens. It was fascinating how there was so much going on--the dynamics between husband and wife, between high class (Sir Phillip Tapsel) and low (Doctor Carlson), between men and women.

Look at Cora's helplessness in this episode. She had no say in how her daughter was treated. And Robert acted like an ass (and a snob of the worst kind) and trusted Sir Phillip instead of Doctor Carlson. Even though Dr. Carlson misdiagnosed Matthew (because he didn't want to give them false hope) and also Lavinia (but the flu changed in an instant, as Cora said).

Someone else pointed out in a blog post (Tom and Lorenzo) that it was interesting how the only people who were outwardly distraught were the two "foreigners" -- the Irishman and the American. The rest of the British were either turning their backs to avoid the sight or were pressed against the wall.

In the other story line, I was impressed with Isobel. She hired Ethel and didn't flinch when Mrs. Bird resigned in a huff.

Why Julian Fellowes Should Totally Hire Me As A Writer

Downton Abbey, Season 3. The first two seasons were great. I had some concerns that S3 might not be able to sustain the same momentum. Unfortunately I was right. (But it's only been three episodes so far--maybe it will get better!)


However, I had a brilliant idea for how the show's plot should turn. I'm going to share it with you now.

SPOILER ALERT: There are no spoilers because everything I'm writing about here never actually happened on the show. But it's better than what actually did happen, which is why Julian Fellowes should totally hire me.

So we all know (because it was in the previews) that Lord Grantham lost all the money (sorry, lost all Cora's money) by investing in Canadian railroads. (Really, Robert?) Matthew is about to inherit a shitload of money from Lavinia's family. (Remember Lavinia? His fiancee? She conveniently died from the flu after realizing that Matthew never truly loved her.) Anyway, Lady Mary wants her new hubby to use that money to save Downton, but Matthew is too darn noble and boring and thinks everyone should actually get a job and put on their own tuxedoes. 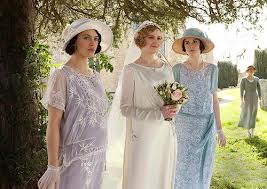 Here is my idea. Edith finally marries her suitor, Sir Anthony Strallen. But then he up and dies on her right after the honeymoon, leaving her a very rich widow. Thus Edith decides to use Sir Anthony's money to save Downton, but on one condition. She gets to be the Countess of Grantham, not Mary. As Edith sees it, Mary doesn't deserve to become Countess because her husband was too stingy with his own inherited money (despite the fact that he is the named heir). Thus Edith saves the day and Downton! No one has to move to a crummy cottage, all the servants keep their jobs, and Edith finally FINALLY gets to reign over Mary. 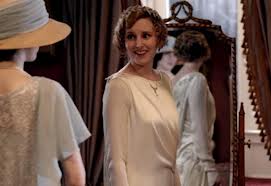 Yes, I think Edith likes that idea very much!

Of course this opens the door to all sorts of plot twists, such as how Mary schemes to push Edith out of the way and get back the title of Countess for herself. 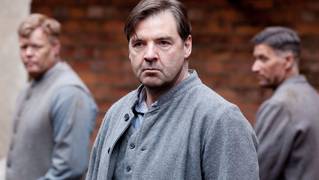 I'm not sure what happens with Bates, but puh-leeze, I can come up with something that's better than this. Maybe Matthew uses his money to buy Bates' freedom? Bribe a judge? Matthew is a lawyer (or is it solicitor?) after all. 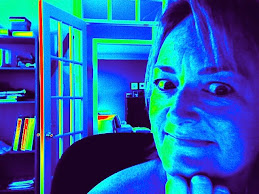 More on what I'm reading at: